We are designing a mixed-use structural intervention for working individuals and passers-by such that they have conducive spaces to work, play and relax. 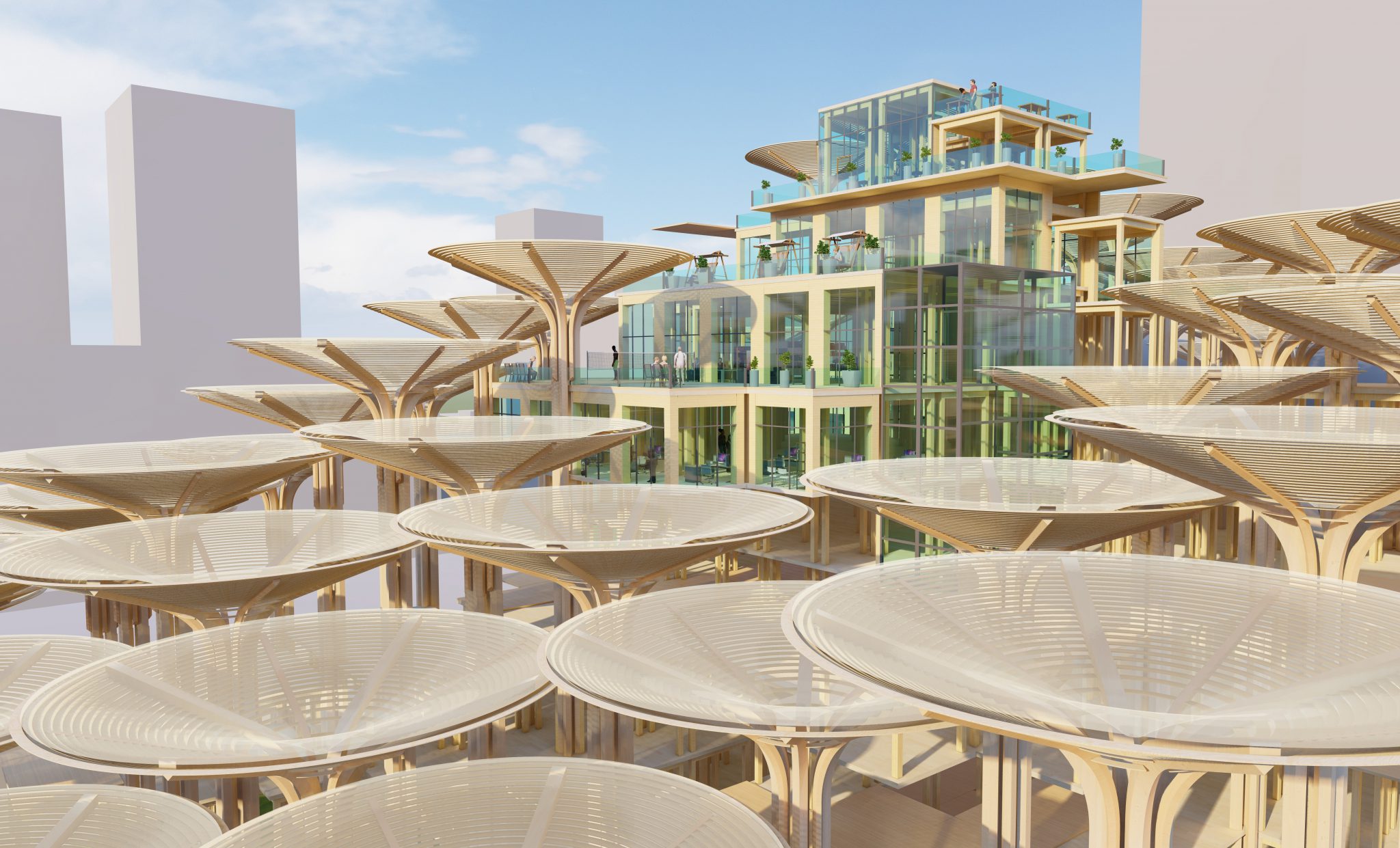 The project revolves around the idea of design for disassembly using mass engineered timber, hence the project started off with research into these systems. Our team’s driving concept was the kawung motif, which is an interlocking circle pattern commonly found in Java culture. We used it as our inspiration for our design strategy to create modular systems relating to structure and shade. Through many precedent studies, including Atlassian Sydney HQ, Google HQ, and the Swiss Re Tower, we settled on a two-layer structural system: an exterior load-bearing and structural system with an interior system. Therefore, we have designed the Maison Domino (bay of structures) with these features. Our maison can be deconstructed into the following kit of parts, consisting mainly of columns, beams, and floor slabs. Steel pipes have been inserted into the main structural columns to reinforce their rigidity. There are five key modules in the maison, namely the umbrella, the main columns, small modules (4 * 4 * 3m), long modules (8 * 4 * 3m), and big modules (8 * 8 * 4.5m). The umbrellas form the canopy of shade for the project, and they will be covered with a membrane layer on top and a layer of slats below. The membrane is the first layer of light diffusion, followed by the slats. The membrane also serves to channel water down the central pipe of the umbrellas that run down through the main columns. Slats below the membrane allow for porosity and wind to pass through. The two layers are separated to reduce the amount of heat radiation transferred between them while allowing for natural ventilation. The voxel grid and umbrellas form overlapping grids which are 45 degrees to each other (black = voxels, yellow = umbrella). Drawing circles around the umbrellas, we can begin to see hints of the kawung pattern starting to form. This is how we plan to achieve the canopy of shade for our project.

Our project was developed on the basis of the future of work. In light of the COVID-19 pandemic, we see a paradigm shift towards working from home (WFH). Office spaces have become less relevant in the city; people are growing accustomed to working from home. The change has also led to positive environmental effects, with reduced carbon emissions since less transportation is required. As such, there is an opportunity to decentralise the workspace from the Central Business District (CBD) and dispersing workspaces closer to homes (HDBs), catering for individuals who simply cannot work from home due to other external factors that hinder them from doing so. This results in dispersed co-working spaces that are conducive for meeting and work; bringing the office spaces within the residential zones provides accessibility, and spaces of varying height can be differentiated into various programmes.

Void decks and vacant spaces in-between blocks of HDBs are currently underutilized, despite HDB’s attempt to design facilities for public use. Void decks have been a part of Singapore’s heritage, being a space for “building community ties and promoting racial Integration”, as noted by the National Heritage Board. Efforts are being made by HDB to engage with members of the public to create a more vibrant neighbourhood. Given the availability of void decks and vacant parking spaces in-between residential blocks, our project proposes how we can make use of this opportunity to create co-working spaces to accommodate the new WFH culture and improve the liveliness of the neighbourhood through public spaces. Our chosen site is the in-between spaces of the Veerasamy HDBs, where the spaces we will be using are the open-air parking lots that we intend to use as catalysts towards creating spaces for work and social integration. We did detailed site analysis, and it was revealed that our site experiences high amounts of radiation and does not receive a lot of shade. The prevailing north and south winds in Singapore enters the site at certain points, and these will be used to influence the massing form. It can be seen from the Urban Redevelopment Authority’s plans that there are cycling routes through the site, hence the project will attempt to retain the existing circulation pathways through the site. We also did a programmatic study of the context, where most of the site comprises enterprises dwelling in the local shophouses within the site. Therefore, this pushed our programmatic developments to cater for recreational activities as we noted a lack thereof within the 450m radius, that will serve the residence and the users of the space.

With the site analysis in mind, we developed the following site diagrams. Beginning with laying the double grid system and accounting for wind, we created the basic mass. A simple canopy was draped over, which was then populated with umbrellas. Internal massing was then redefined into the various programs.

A closer look at the distribution of programs can be seen in the exploded diagram. Public oriented spaces such as F&B, recreational spaces and community spaces are located on the highest and lowest zones. Office spaces with smaller scale F&B and recreational spaces are located towards the centre of the mass. The ground levels are made of mostly void spaces to allow for unobstructed circulation through the site, so that individuals can continue to traverse the space. Vertical circulation is made possible through vertical cores located around the structure, to allow people to access the various levels in the structure.

This is a site plan, where it occupies the void spaces and it comprises the Kawung patterning of concentric canopies that serve as the main structure. Due to the change in heights, it resulted in the varying depths that resemble fish scales especially when seen from the top. Our intention was to keep the first floor completely public and porous. We envision this to be a node for cyclists to take a break in the middle of their cycling journey and they can benefit from the public amenities here, or a destination for cyclists who can easily access the space through the cycling route. This is the street view, with the canopy heights changing, it creates some levels of porosity where more light enters when the sun angle is lower but at the same time shades the dwellers from the intense afternoon sun common in Singapore’s context. This view showcases the ground circulation space that was drilled for wind ventilation and also a cycling pathway for cyclists to cycle through. It is also easily accessible to the public and it is like an atrium space where people can look down and see the activities happening down there. Upon moving up, there will be more office spaces and the landscape kind of steps towards the centre, while having another void that was created from the CFD analysis as well based on the turbulence generated by the urban setting. Through the step profile and the voids, the office spaces are complemented with plenty of public spaces where it creates a vertical kampung where everyone can see what everyone is doing. Work then becomes an opportunity to foster new social interactions and relationships, which is how this strategy intends to bring people together. The sections show the dedicated circulation through the structures that we retained. As the structure approaches the neighbouring shophouses, we can also see how the umbrellas descend closer to the street as well, creating shade over the road that cuts through the site. This is a short section through the structures, and we can see more clearly the mix of bigger and smaller spaces. At the top of the structure, we get views over the shophouses. Dining and recreation activities are dispersed at the higher spots to also draw people up into the mass of structure