The Ex-Prefectural Office has been conserved and transformed to become the Gifu Re-Creation Hub with the theme for everyone, forever. This building is a one stop point for all Gifu residents regardless of age to be able come together to take part in active citizenry activities. Overall, the design of the building seeks to allow Gifu to foster a stronger connection between the government, businesses and residents. Furthermore, it is integrated with the adjacent multi-story carpark, such that ideas, objects and memories can be recreated when people and things are brought together. 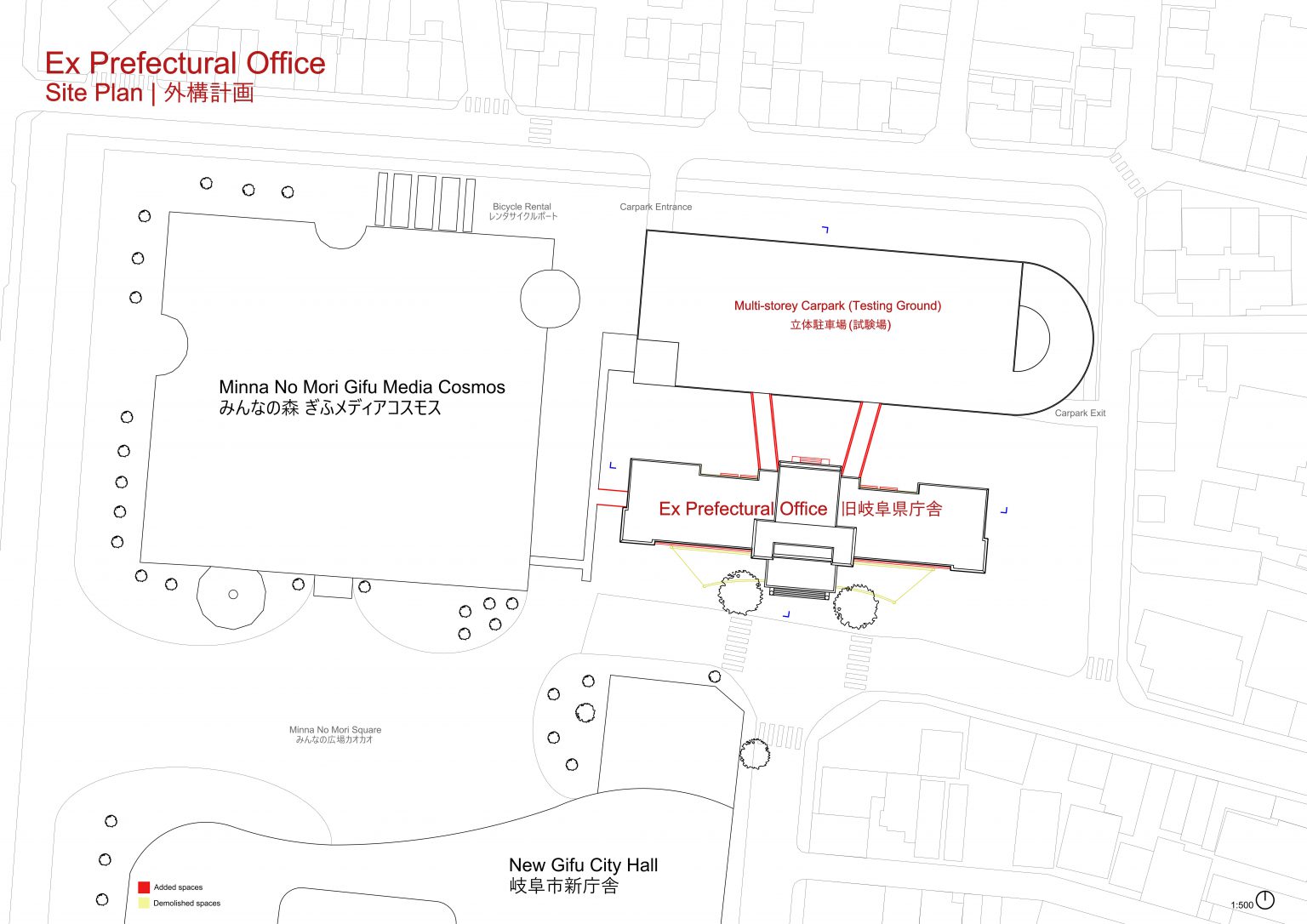 It is located right next to, firstly the new upcoming City Hall, which is a place of governance and of which majority of its users are working adults. Secondly, the Media Cosmos, which is a place largely for leisure frequent by people both young and old. Lastly, it is also along a major trunk road which has connections via public transport to places like schools, businesses, places of worship and homes in the neighboring area. All three areas of, the government, businesses and the people can then be harnessed in a circular relationship to foster this stronger connection.

On the first floor of the hub three main activities takes place; the recycling of materials brought in by residents, a secondhand and exchange goods shop which would reuse these materials, and also spaces within the integrated carpark for recharging e-vehicles so as to increase convenience for people to adopt e-transports. On the second floor two main activities takes place; FABLAB and workshops spaces to allow residents to reimagine possibilities and create their own projects, and the linked repurposed carpark which is an open-air experiment area for their projects. On the third floor two main activities takes place; data informatics and citizen science spaces allow for active citizenry so that the local government would be able to make use of these data to rejuvenate the residents life, and there are research spaces to process these data. 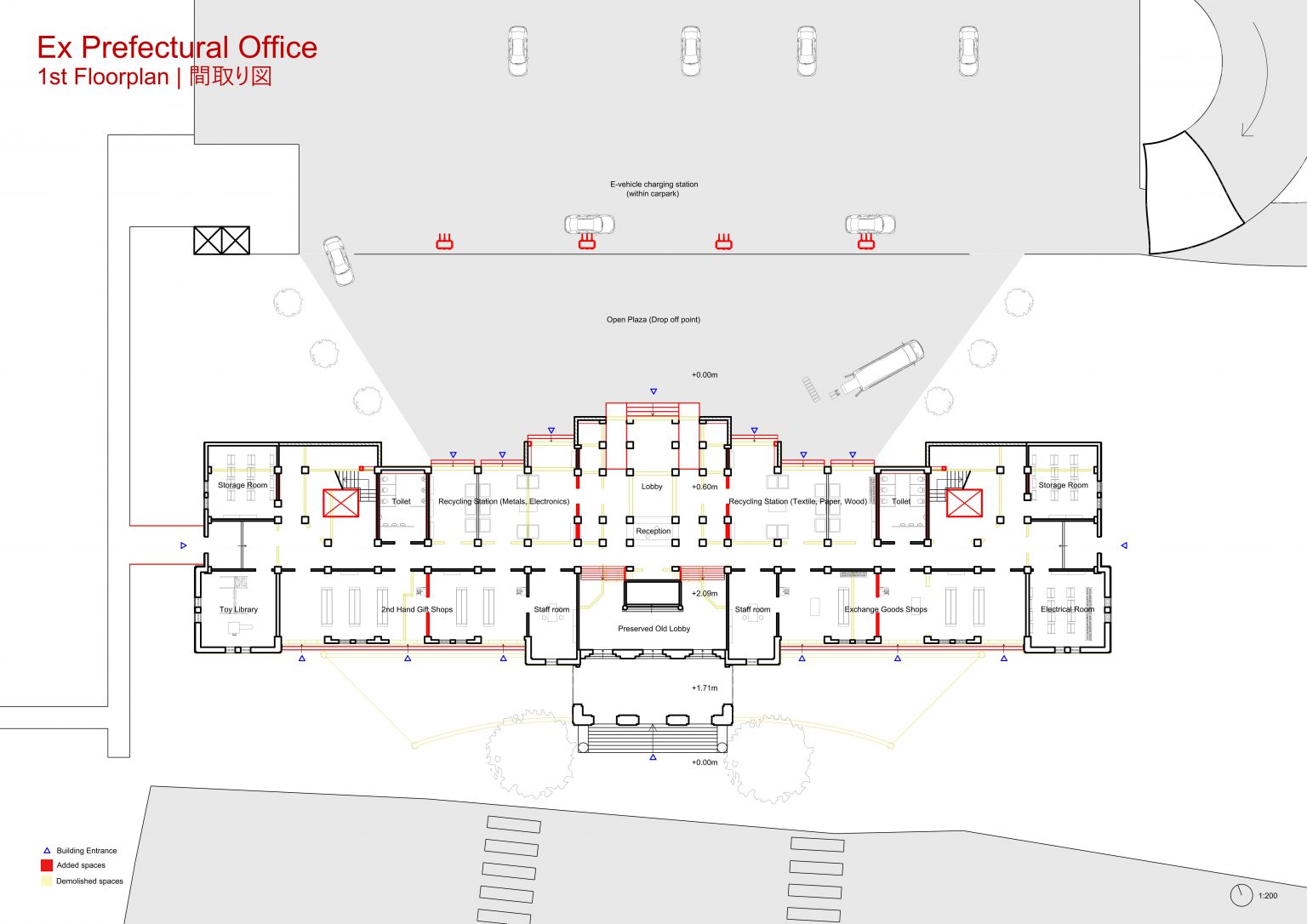 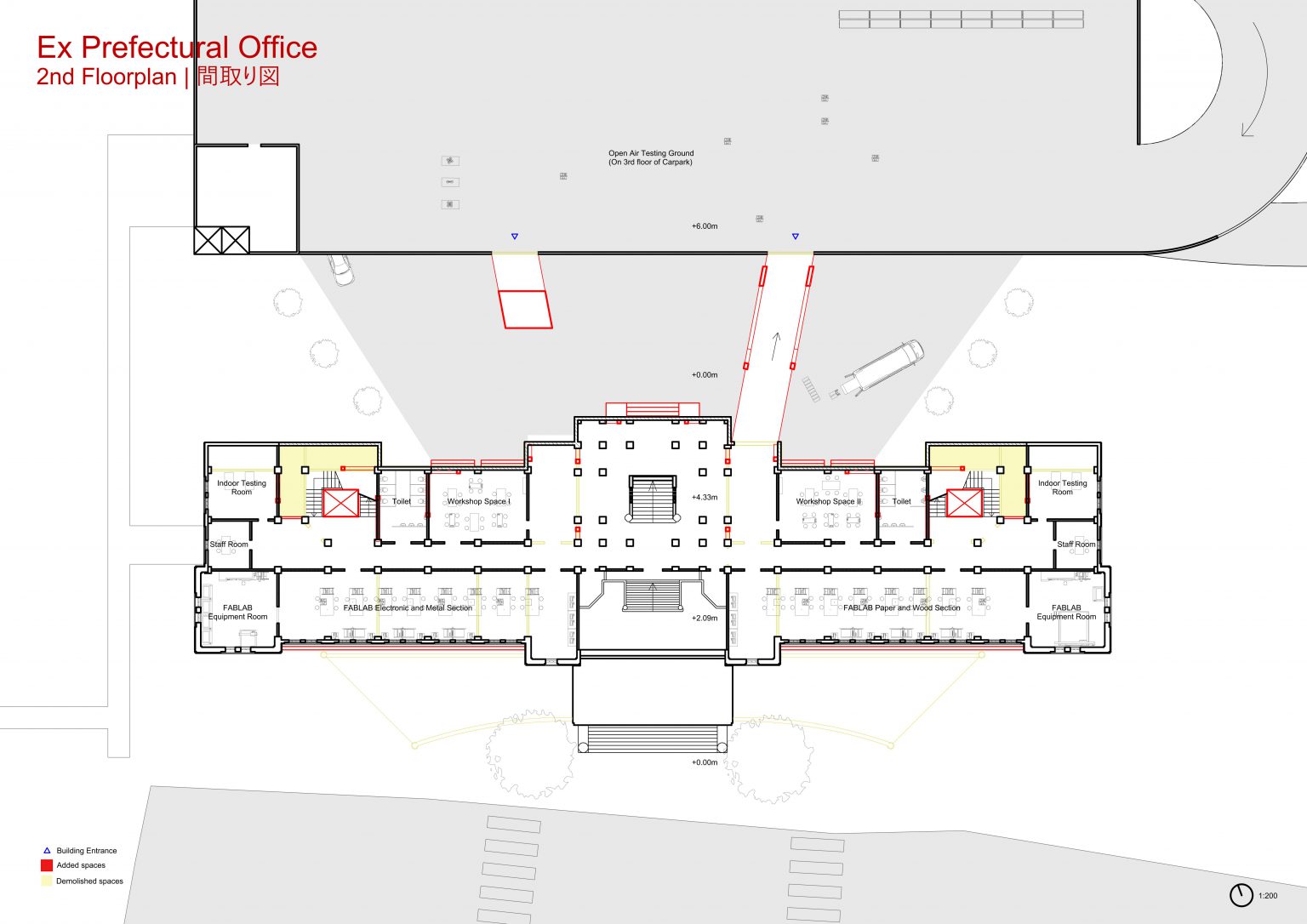 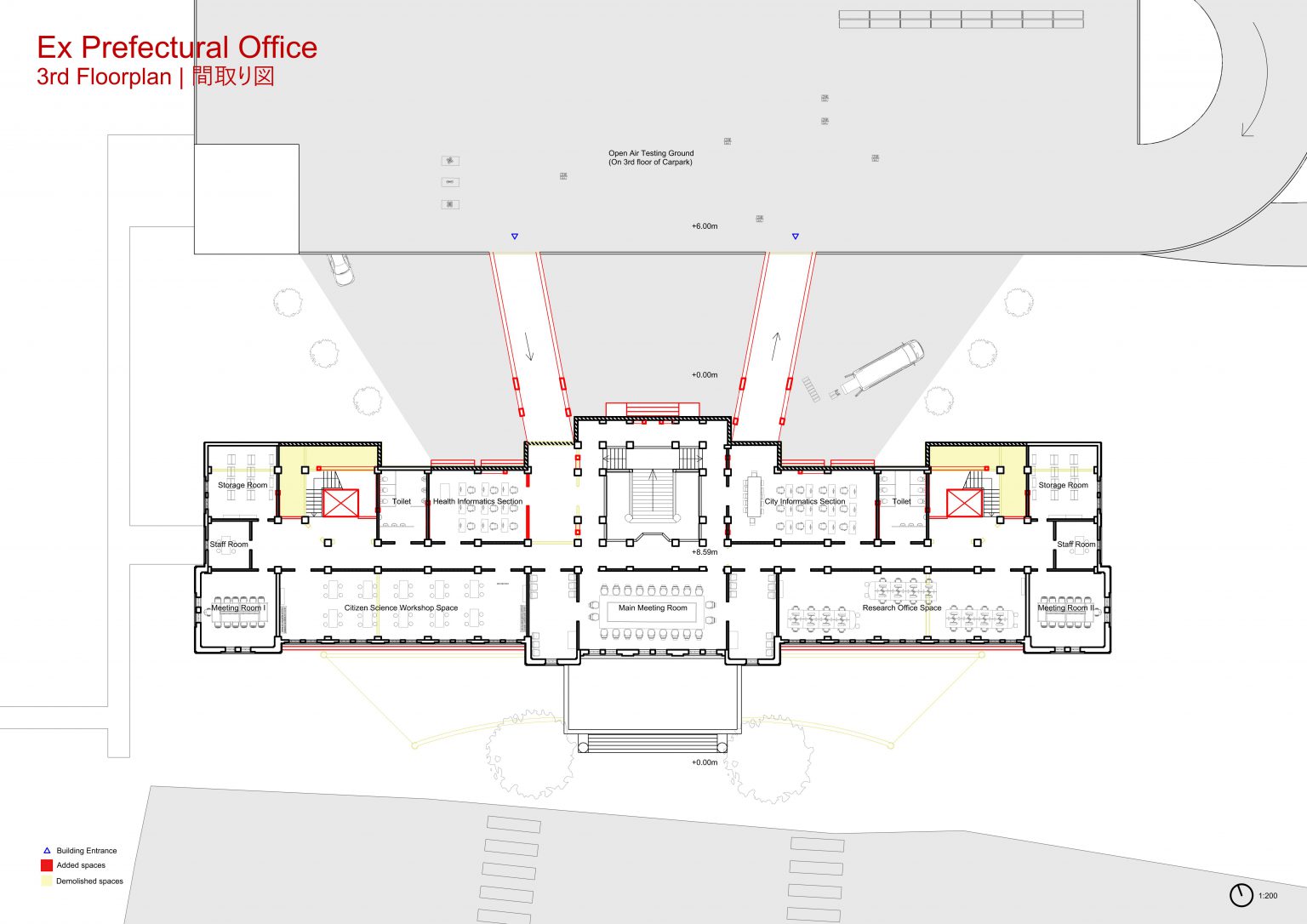 In addition, the building former facade which is of heritage importance is largely preserved and becomes the new back entrance of the building with the stairs still leading up to the higher floors which working adults from the City Hall may want to access easily. This dualism of the Re-Creation Hub can be seen by the old and new facade of the 1:200 model, with the old facade largely intact while the new facade which used to be walled up, now being reconstructed with glass, and being opened up and transparent to be more welcoming. While at the same time including a more industrial look as this new front overlooks the main unloading of recyclables. 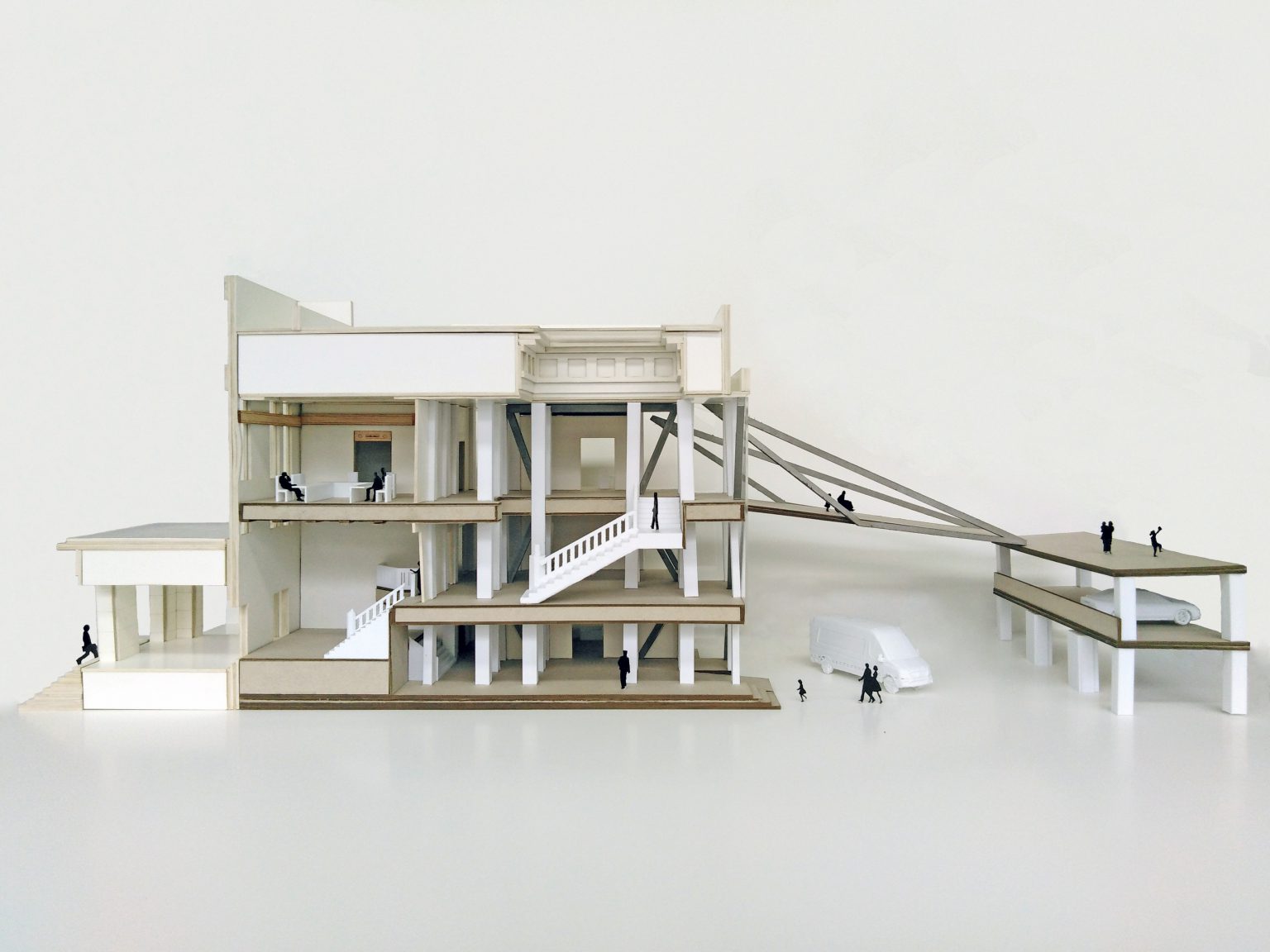 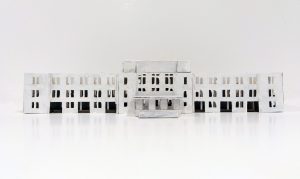 Within the building, in the 1:50 model, the old corridors which used to be long and narrow are now mainly surrounded by glass walls which allow people to view the activities that are being carried out within the various rooms. Spaces like the main old central meeting room and the central stairs are largely preserved and are used as meeting rooms and circulation spaces. While other areas have been repurposed to become the health informatics section and workshop spaces amongst other uses. Hence, as whole the Gifu Re-Creation Hub would hopefully be able to foster stronger relationship between the government, businesses and people – for everyone, forever. 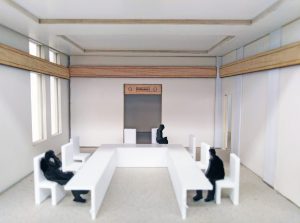 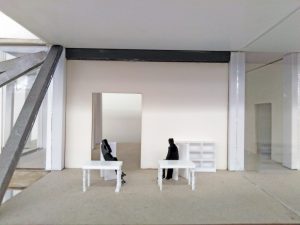 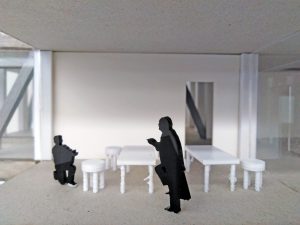